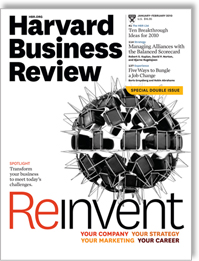 Harvard professor Teresa Amabile, whose transformative work I describe in Drive, has a fascinating piece in the (newly revamped) Harvard Business Review, which is just hitting newsstands.

Amabile tracked the day-to-day activities and motivations of several hundred workers over a few years and found that their greatest motivation isn’t external incentives, but something different: Making progress (or what Drive calls “mastery” — the urge to get better and better at something that matters.)

Read the whole article, which is part of HBR’s “10 Breakthrough Ideas for 2010.” But here are some key quotes:

12 Responses to “Harvard Business Review on what really motivates workers”

Leave a Reply to Elad Sherf