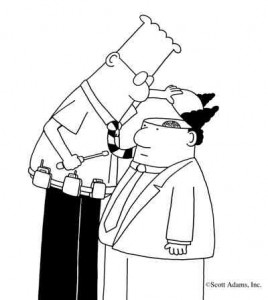 Many of us know that one secret to generating good ideas is producing bad ideas.  But if you look on your bookshelf or visit the best creativity and productivity blogs – or even ask Mr. Google “how to come up with bad ideas” —  you won’t find much guidance.

Thank goodness, then, for the brilliant and irrepressible Scott Adams. In a recent Wall Street Journal essay, the Dilbert creator borrowed from his experience as a television writer to suggest one of the best creativity exercises I’ve encountered.

I spent some time working in the television industry, and I learned a technique that writers use. It’s called “the bad version.” When you feel that a plot solution exists, but you can’t yet imagine it, you describe instead a bad version that has no purpose other than stimulating the other writers to imagine a better version.

For example, if your character is stuck on an island, the bad version of his escape might involve monkeys crafting a helicopter out of palm fronds and coconuts. That story idea is obviously bad, but it might stimulate you to think in terms of other engineering solutions, or other monkey-related solutions. The first step in thinking of an idea that will work is to stop fixating on ideas that won’t. The bad version of an idea moves your mind to a new vantage point.

In the piece, Adams uses the bad version process to suggest some provocative (and hilarious) ideas for reducing the US federal budget deficit. But the broader technique can apply to just about any creative stumbling block.

Leave a Reply to Hugh Culver