How to make a New Year’s
non-resolution 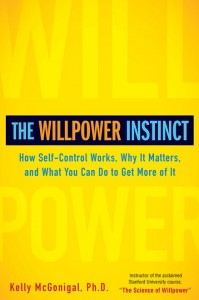 Man, am I glad it’s a new year. I need a re-boot. And as I contemplated my resolutions for 2012, I reached out to Kelly McGonigal for some guidance.

Kelly is a Stanford lecturer and author of the terrific new book, The Willpower Instinct (Buy it at Amazon

, BN.com, or IndieBound) that explores the psychology, economics, and neuroscience of self-control and that offers some compelling (and counter-intuitive) advice.

You say that instead of making a New Year’s resolution, we should instead pledge not to change something in our lives. Why?

Most people make a fundamental mistake when thinking about their future choices. We wrongly but persistently expect to make different decisions tomorrow than we do today.

I’ll skip the gym today, but I’m sure I’ll go tomorrow. I’ll put this on my credit card today, but no more shopping for a month. I don’t want to get started on the project now, but I’ll tackle it first thing in the morning. The more people have faith in their futures selves, the more likely they are to indulge today. In fact, just knowing you’ll have the chance to choose again tomorrow increases the chance you’ll choose habit or vice today.

Behavioral economics provides an interesting solution. When you want to change a behavior, aim to reduce the variability in your behavior, not the behavior itself.

What do you mean by “variability?”

Take, for example, a smoker who wants to quit but can’t. The typical approach is to set a goal to smoke fewer cigarettes – or even quite out right. But imagine instead that the smoker simply tries to smoke the same number of cigarettes every day. Research shows that they will gradually decrease their overall smoking– even when they are explicitly told not to try to smoke less.

Hmmm. How does that work?

So what do we say to ourselves in the moment of temptation to give ourselves that reality check?

Okay. So what you are you resolving not to change this year?

Over the years, I’ve made a number of no-change resolutions that have stuck, including exercising every day (instead of taking the consequences of not exercising every day). So I know it works! This year I’m aiming to reduce variability in my sleep. I’ve been an inconsistent sleeper all my life with a lot of temptations to both stay up and sleep in. There’s fascinating research coming out about the physical and mental health benefits of not just getting enough sleep, but keeping a predictable sleep schedule. People should feel free to email me at 2 AM or check my Twitter feed timestamp so to see I’m keeping my word.

Leave a Reply to Stafford Kendall