How to move people with two irrational questions 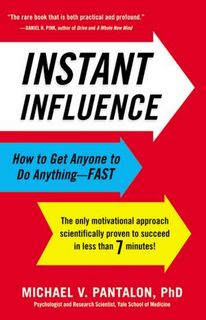 Unless you’re a hermit in a cave somewhere (and if so, how are you reading this blog?), you’re probably in a position to influence someone in your circle – children, a significant other, your co-workers, your boss – several times a day.

Lately I’ve been digging into this broad question of how of we move people and I consulted a fascinating book I’d read several months ago titled Instant Influence: How to Get Anyone to Do Anything – Fast! (Buy it at Amazon, BN.com, or IndieBound). The author, Michael Pantalon, is a psychologist research scientist at the Yale School of Medicine. And he’s generously agreed to share one of the tips from the book with us. If you get a chance to try this technique, let us know in the Comments section how it worked out for you.

For example, imagine you’re a manager at a major PR firm and one of your reports balks at revising an important part of the next big campaign.  Instead of asking rational but ineffective questions, try the following 2 seemingly irrational questions:

1. How ready are you to make the revisions, on a scale from 1 to 10, where 1 means not ready at all and 10 means totally ready?

Make sure she gives you a number. On the rare chance that she says, “1,” surprise her by saying, “What would turn it into a 2?” In telling you what it would take for her to become a 2, she reveals what she needs to do before she is able to make the revisions to the campaign. That is what you motivate her to do first.

Question 1 seems irrational, because you’re asking, “How ready are you…?” of a person who just said, “No,” which we can assume means not at all ready.  However, most resistant people have some motivation that they keep from us.  If you ask, “Are you going to take my suggestion, yes or no?” they continue to keep their motivation hidden.  But if you ask them the “1-10” question, they’re much more likely to reveal their motivation by saying a 2 or a 3, which is far better – you’ve now moved from a “No” to at least a “Maybe.”

Question 2 seems really irrational, perhaps even absurd. It’s the opposite of the rational and expected question, “Why aren’t you more motivated?” which only breeds more resistance.  However, by asking Question 2, you’re asking her to defend why your directive to revise the campaign is even the slightest bit important to her (e.g., deep down, she knows getting over her defensiveness around critique is an important career goal) rather than to defend her excuses why she won’t do it (e.g., too busy).  The answers she gives lead her to rehearse the positive and intrinsic reasons for doing what you asked, which, in turn, dramatically increase the chances that she gets the project done.

31 Responses to “How to move people with two irrational questions”