Too many left-brain organization men spoil the pot 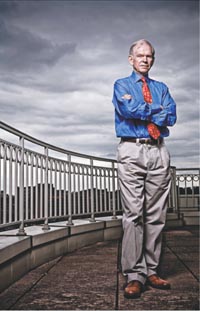 Back in 2006, money manager Jeremy Grantham was one of the first to sound the alarm that world credit markets were about to implode.  Of course, he was right. And of course, nobody listened.

But this time around, people are paying attention to an interview Grantham gave to Barron’s last week.  He has several interesting insights, but the most intriguing is his explanation for why we got into the mess in the first place (empahsese added):

“I ask myself, ‘Why is it that several dozen people saw this crisis coming for years?’ I described it as being like watching a train wreck in very slow motion. It seemed so inevitable and so merciless, and yet the bosses of Merrill Lynch and Citi and even [U.S. Treasury Secretary] Hank Paulson and [Fed Chairman Ben] Bernanke — none of them seemed to see it coming.

I have a theory that people who find themselves running major-league companies are real organization-management types who focus on what they are doing this quarter or this annual budget. They are somewhat impatient, and focused on the present. Seeing these things requires more people with a historical perspective who are more thoughtful and more right-brained — but we end up with an army of left-brained immediate doers.

So it’s more or less guaranteed that every time we get an outlying, obscure event that has never happened before in history, they are always going to miss it. And the three or four-dozen-odd characters screaming about it are always going to be ignored. . . .

So we kept putting organization people — people who can influence and persuade and cajole — into top jobs that once-in-a-blue-moon take great creativity and historical insight. But they don’t have those skills.”