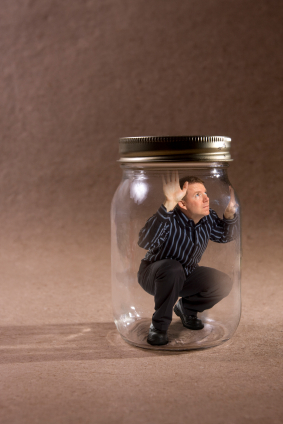 Ever come up with a great idea for someone else, but find yourself stymied by your own problem?

Recent research by Evan Polman of NYU and Kyle J. Emich of Cornell may shed some light on why. In three sets of experiments, they found that when people solved problems on behalf of others, they produced faster and more creative solutions than they did when they solved the same problems for themselves.

In the first experiment, Polman and Emich asked participants either to draw an alien for a story they were going to write themselves or for someone else’s story. The aliens people sketched for others were more creative than the ones they drew for themselves.

In the second study, participants were asked to come up with gift ideas for themselves, for someone close to them, or for someone far away. The result: The more distant the recipient, the more creative the gift.

And in the third study, participants had to solve the following problem:

A prisoner was attempting to escape from a tower. He found a rope in his cell that was half as long enough to permit him to reach the ground safely. He divided the rope in half, tied the two parts together, and escaped. How could he have done this?

Polman and Emich say the principle at work is something called “construal-level theory,” which in simple terms means that we think in more abstract terms about distant problems (or problems belonging to distant people) — and thinking at a more abstract level produces more creative solutions.

So given that we’re often more creative solving someone else’s problems, what can we do to more effectively solve our own? Here are three ideas:

1. Trade problems with someone. When you get stuck, stop hammering away at the problem and find a colleague to swap with.

3. Put some distance between yourself and your project. Writers know something magical happens when you put your manuscript away in a drawer. When you come back to it a week or a month or six months later, you have a fresher, more creative perspective on the work. When you can, build some slack into your deadlines and try putting your work out of sight for as long as you can manage.

Have you tried this approach? Has anyone set up a website to allow people to swap problems? (Seems like a promising business.) And how the heck did the prisoner escape? If you’ve got answers, respond in the Comments section.

41 Responses to “3 tricks for solving problems faster and better”