How to understand regret — and 2 ways to avoid it 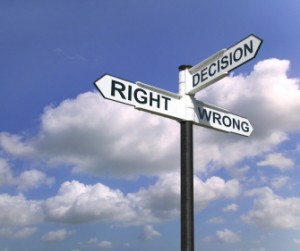 Sometimes when I’m stuck on a course of action, I use two techniques to help me decide.

One is what I call the “90-year-old me Test.” I imagine I’m 90 and looking back at the decision before. What will I want to have done in this situation? In most cases, the 90-year-old me wants today’s me to take an intelligent risk rather than to avoid one — and to act nobly rather than like an ass.

The other I call the “Viktor Frankl Test.” In his book, Man’s Search for Meaning, Frankl advises: “Live as if you were living for the second time and had acted as wrongly the first time as you are about to act now.”

Both techniques are forms of what we might think of as “regret management.” They’re based on the idea that one key to decision-making is to avoid subsequent regret.

That’s why I was intrigued by a new study that fluttered into Pink, Inc., world headquarters during a recent vacation. In it, Mike Morrison of the University of Illinois and Neal J. Roese of Northwestern asked 370 Americans about their lives’ deepest regrets. Here’s a quick summary of the results, some of which surprised me:

At the risk of turning this into an online therapy session, I’m curious to know what sorts of things you regret — and what techniques you use to avoid or mitigate it. Add your voice to the Comments section, which one reader recently told me “was better than the blog itself.” (BTW, I don’t regret that for a moment.)