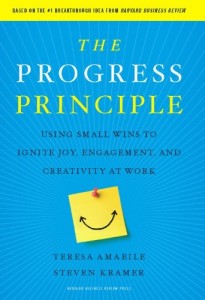 Here’s a tip for rounding out your summer reading. Pick up a copy of The Progress Principle: Using Small Wins to Ignite Joy, Engagement, and Creativity at Work. The book, which pubs today, is one of the best business books I’ve read in many years. (Buy it at Amazon, BN, or 8CR).

And to do that, they took a rigorous and painstaking approach. They recruited 238 people across 7 companies — and each day sent these folks a questionnaire and diary form about their day. Twelve thousand diary entries later — you read that right: Amabile and Kramer amassed 12,000 days worth of data — they reached a set of fascinating conclusions.

Chief among their findings: People’s “inner work lives” matter profoundly to their performance — and what motivates people the most day-to-day is making progress on meaningful work.

I asked Amabile if she’d answer some questions for Pink Blog readers about her book and her insights. You can read the interview below.  You can also talk to her live later this month on the next episode of Office Hours.

Lots of business books talk about the need for bold, audacious goals — and deride those who “think small.” But your book, which is based on research far more rigorous than its counterparts, takes a different stance. You emphasize the power “small wins.” Why are those so important in the performance of individuals and organizations?

Try to remember the last time you – or anyone you know – had a truly enormous breakthrough in solving a problem or achieving one of those audacious goals. It’s pretty hard, because breakthroughs are very rare events. On the other hand, small wins can happen all the time. Those are the incremental steps toward meaningful (even big) goals. Our research showed that, of all the events that have the power to excite people and engage them in their work, the single most important is making progress – even if that progress is a small win. That’s the progress principle. And, because people are more creatively productive when they are excited and engaged, small wins are a very big deal for organizations.

In addition to examining 12,000 daily diary entries from workers, you also surveyed a few hundred leaders — from CEOs to project managers — about what they think really motivates employees. What did you find out?

Our survey showed that most leaders don’t understand the power of progress. When we asked nearly 700 managers from companies around the world to rank five employee motivators (incentives, recognition, clear goals, interpersonal support, and support for making progress in the work), progress came in at the very bottom. In fact, only 5% of these leaders ranked progress first – a much lower percent than if they had been choosing randomly! Don’t get me wrong; those other four motivators do drive people. But we found that they aren’t nearly as potent as making meaningful progress.

Along those lines, many bosses believe that best way to ensure top performance is to keep their charges on edge — hungry and a little stressed-out. But you found something different. Explain.

If people are on edge because they are challenged by a difficult, important problem, that’s fine – as long as they have what they need to solve that problem. But it’s a dangerous fallacy to say that people perform better when they’re stressed, over-extended, or unhappy. We found just the opposite. People are more likely to come up with a creative idea or solve a tricky problem on a day when they are in a better mood than usual. In fact, they are more likely to be creative the next day, too, regardless of that next day’s mood. There’s a kind of “creativity carry-over” effect from feeling good at work.

Yet negative events have a more powerful impact than positive ones. Why?

We were pretty shocked to discover the dominant effect of negative events on inner work life – people’s mostly-hidden emotions, perceptions, and motivations at work. Setbacks have a negative effect on inner work life that’s 2-3 times stronger than the positive effect of progress. When we checked into whether other researchers had found something similar, we learned that it’s a general psychological effect; “bad is stronger than good.” The reason could be evolutionary. Maybe we pay more attention to negatives, and are more affected by them, out of self-preservation. So – because positive inner work life is so important for top performance, leaders should do whatever they can to root out negative forces.

I was especially intrigued by your findings about time pressure. Sometimes it helps; other times it hurts. Tell us what you found.

The typical form of time pressure in organizations today is what we call “being on a treadmill” – running all day to keep up with many different (often unrelated) demands, but getting nowhere on your most important work. That’s an absolute killer for creativity. Generally, low-to-moderate time pressure is optimal for creativity. But we did find some instances in which people were terrifically creative under high time pressure. Almost invariably, it was quite different from being on a treadmill. Rather, people felt like they were “on a mission”— working hard to meet a truly urgent deadline on an important project, and protected from all other demands.

What are one or two specific things individuals can do to improve their inner work lives and increase their chances of making progress on meaningful work?

Religiously protect at least 20 minutes – and, ideally, much more – every day, to tackle something in the work that matters most to you. Hide in an empty conference room, if you have to, or sneak out in disguise to a nearby coffee shop. Then make note of any progress you made (even if it was a small win), and decide where to pick up again the next day. The progress, and the mini-celebration of simply noting it, can lift your inner work life.

What are one or two things bosses can do to re-architect the workplace and its policies to put progress at the center?

Bosses can religiously protect at least 5 minutes, every day, to think about the progress and setbacks of their team, and what enabled or inhibited that progress. The daily review should end with a plan to do one thing, the following day, that’s most likely to facilitate progress – even if that progress is only a small win. I think this practice, if used widely, could make a real difference in organizational performance and employee inner work life. And good inner work life isn’t only a matter of employee retention or the bottom line. It’s a matter of human dignity.

16 Responses to “Why progress matters: 6 questions for Harvard’s Teresa Amabile”