Does being reminded of money make you an uncooperative jerk or an independent thinker? 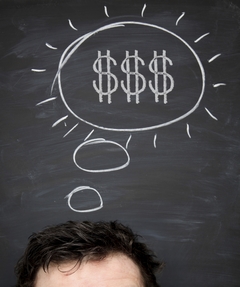 Dedicated readers know that I’ve written a fair bit on how contingent rewards, including money, can go awry in all sorts of ways — resulting in poorer performance, diminished creativity, reduced interest in tasks that were once intrinsically interesting, and so on.

But can the very idea of money also affect our behavior?

The researchers carried out a sneaky experiment that had two components. First, they asked their participants to fill out a questionnaire on a computer. The questionnaire itself wasn’t important. What was important was the desktop wallpaper. For half the participants, the wallpaper showed a pattern of shells; for the other half, it showed a pattern of Euro notes and coins. (In the parlance of social psychology, that second group was “primed” with money.)

Next, they took the participants and another person of the same gender into a room and gave them a beverage to taste. This is a new sports drink called Vigor, they told their subjects, and we want your opinion of it for a marketing study.

Then came the test: Did the money prime make any difference in the participants’ opinions about the beverage?

Ample research, especially the extraordinary work of Robert Cialdini, has shown we’re quite susceptible to social influence. When we hear that other folks like something, we tend to like it, too. And that pattern held — at least for the people who saw shells in their computer background. These folks liked the beverage more when the confederate said he or she liked it and less when the confederate said he or she didn’t like it.

But for the subjects primed with money — again, just some background images of Euros — the response was the exact opposite. As the researchers write:

Liu, Smeesters, and Vohs say that money cues can operate as threats and “produce contrarian reactions that are the opposite of the source’s intent.” Other research has shown that being reminded of money can make people more single-minded and more apt to work harder — but also less social, less cooperative, and less likely to help others.

It’s a bit odd, they explain. “Money has bigger effects on people’s thoughts, feelings, and behavior than simply what it can do as an exchange medium or store of value . . . Mere reminders of it are enough to drastically change people’s preferences for work, play, and interpersonal relationships.”

So the next time you try to raise the issue of moolah in an effort to persuade a prospect or an employee, think twice. Making it all about the coin can sometimes get you the opposite of what you want.

10 Responses to “Does being reminded of money make you an uncooperative jerk or an independent thinker?”