Can negative thinking be a positive? 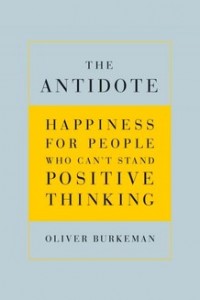 Do we try too hard to be happy? Has the relentless pursuit of happiness and positivity poisoned our ability to live a meaningful life?

Oliver Burkeman thinks so. And he’s given us The Antidote (Amazon, BN.com, IndieBound)  — a smart and entertaining new book that offers what he calls a “negative path” to happiness.

Because Pink Blog readers are interested in the broad array of subjects Oliver writes about in this book, l asked him to answer a few questions. Here’s our interview:

1. You call our culture’s “fixation on positivity” a “disease.” But the cure you prescribe — drawn from the teachings of the Stoics, the Buddha, and other deep thinkers — is pretty challenging stuff. Where’s the harm in positive thinking if it makes us happy?

Well, I’m not sure that it *does* make us happy: there’s now plenty of psychological evidence to suggest that trying to make yourself think positive thoughts can backfire, leaving people feel worse. More practically, this focus on struggling to achieve the “right” emotional state – ie., constant grinning optimism — is a distraction from taking the actions that matter. (Plus, those people are pretty annoying.) The researchers and thinkers I met while researching my book, and the personal experiments I undertook, approached the matter differently. What if we learned to accommodate, even harness, uncertainty, insecurity, pessimism and failure, instead of treating them like they’re radioactive?

2. “Goal Crazy” might be the most provocative chapter in the book. You could fill a library with all everything that’s been written on achieving personal and professional goals, and yet you say that this relentless focus on goals is misplaced. What’s so bad about setting, working toward, and achieving goals?

There’s a role for goals. But the “overpursuit” of goals leads to all kinds of hazards. One major pitfall is that “you can never change only one thing” — and so focusing on a single variable risks distorting many others. (We probably all know people who’ve pursued a wealth goal, say, at the expense of their personal relationships, but that’s only the most obvious example.) Another is that rigid plans for the future mean we don’t hear when opportunity knocks softly. Research among successful entrepreneurs by Saras Sarasvathy, for example, suggests they choose what she calls “effectuation”, instead of firm business plans. They don’t behave like gourmet chefs, visualizing a perfect dish and then sourcing the ingredients. They’re more like time-pressed home cooks, checking what’s in the cupboard, then exploring ways to combine the resources at their disposal — ideas, materials, people. Then they just start, adjusting their target as they go: “ready, fire, aim”, not “ready, aim, fire.” (Another tip: choose “process” goals over “outcome” goals. Not “I’ll write a great novel”, but “I’ll do 45 minutes every weekday”.)

3. We’ve probably all seen the studies showing that people from some of the poorest nations on earth consistently rank higher in happiness than citizens of wealthy countries. In the book, you offer a counterintuitive explanation for why that may be so — could you briefly explain?

This is such a fraught topic. I don’t mean to imply that poverty and disease are somehow unproblematic, simply because there’s a higher incidence of depression in Manhattan than in some African slums. But what you realize when you visit places like the Kenyan township of Kibera outside Nairobi, and study the research evidence, is that people living in extremely fragile conditions do have one advantage. They’re forced to face the fundamental insecurity of existence. They don’t have the option of mistakenly believing that the next pay raise, the next promotion or a bigger house, will finally make them happy. They’re compelled instead to find ways to live with insecurity — and to build the strong relationships with family and neighbors that are a crucial ingredient of wellbeing. We mustn’t romanticize their situation. But as we’ve seen on the US east coast recently, all our lives, in different ways, are suffused with insecurity. Do we really want to embrace a philosophy of happiness based on trying to ignore that?

4. At the end of The Antidote, you talk a little about some of the techniques that have been most helpful to you. What continues to stick with you personally from your research? What could readers of this blog begin doing today — within the next hour, even — to get started on a more satisfying path?

If you’re feeling daring, do what I did and deliberately embarrass yourself in public — a technique adapted from Stoicism that will transform your perspective on plunging into uncertain or scary situations. (Choose something legal and considerate of others! I spoke the names of stations on the London Underground out loud.) Alternatively, pick a project you’ve been procrastinating on, choose a useful next action, and — this is the critical part — *don’t* try to stamp out the associated negative feelings of reluctance or fear or uncertainty. Acknowledge them, then act anyway. Another thing I’ve turned into a daily habit, albeit haltingly, is meditation. Learning to observe your thoughts and emotions without manipulating them is the opposite of positive thinking: paradoxical though it sounds, getting comfortable with feeling uncomfortable is vastly more powerful than trying to stay positive.

12 Responses to “Can negative thinking be a positive?”