The Hows and Whys of Gamification: 4 Questions for Kevin Werbach 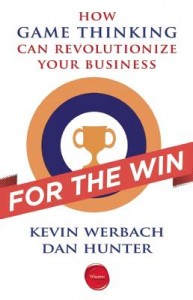 Gamification. It’s one of the year’s top memes. The idea is that the more we embed systems — on the job, for our health, in social movements — with the mechanics and grammar of games, the more effective their participants will become.

Alas, like any white-hot meme, it’s often hard to sort the heat from the light. Thank heavens, then, for For the Win, a new book by Wharton’s Kevin Werbach and New York Law School’s Dan Hunter.

For the Win (Buy it at Amazon, BN, or IndieBound) is a smart and accessible guide to an intriguing subject. It’s grounded in research, but also includes plenty of case studies to bring the research to life.

Because Pink Blog readers are interested in new approaches to human motivation, I asked Kevin to answer a few questions about games, Wall Street, and presidential politics:

1. In your book, you refer to fun as “an extraordinarily valuable tool to address serious business pursuits.” Is gamification a new tool? Does its effectiveness stem directly from the rise of video games, or does it go back farther?

Companies consciously applying game thinking to their processes is new. And it’s happening now because of the rise of video games. Today’s digital platforms also make it possible to incorporate game elements into existing activities in ways that were never possible before. However, the concepts we describe in the book are really much older: what kinds of rewards and experiences motivate people, what makes a good game, and how fun fits into business. Think about it: Cracker Jack started putting toy surprises into every box exactly a century ago.

2. Seems like anytime a system includes a game, there’s someone gaming the system. Could you talk a little about the hazards of gamification?

That’s very important point. So many gamification advocates focus only on the positives. There is an entire chapter of For the Win about limitations and risks, and it’s something we mention throughout. One issue, as you point out, is that any time you create a game, someone will try to exploit the system. That’s not necessarily a danger, though, if you anticipate it. Those are your most engaged players, and you can often redirect their energy in a positive way, such as giving rewards for finding bugs in the game.

A second concern is that gamification can become a means of exploitation or manipulation. If making an activity game-like is a way to trick your customers or employees into doing something they wouldn’t otherwise want to do, you’re probably being unethical and it’s likely to harm your business interests in the long run. The approach we describe in the book is very different, because it’s built around the player’s interests.

3. You write, “The similarities between the interfaces of Wall Street trading terminals, enterprise collaboration software, and massively multiplayer online games such as World of Warcraft are too striking to ignore.” For readers who may not be familiar with one or more of these environments, could you expand on the similarities?

Good information technology organizes and filters information to provide what the military calls “situational awareness.” Think about the Wall Street trader. Huge sums of money can hang on each decision. They have access to tons of resources: current prices, databases, market trends, analyst reports, and colleagues. Seeing the right information at the right time is crucial… but information overload is a constant threat. Trust me, being a raid healer in World of Warcraft feels the same way. Your group can die any time you make a wrong mouseclick. A WoW raid is a symphony of data flows: commands, notifications, performance stats, and multiple communications channels to choreograph up to 25 players. While most real-world business roles aren’t such a pressure cooker, good decisions at work always benefit from good information and good feedback. We can learn a great deal from the way game designers — and game players — build systems with same goals.

4. You write, “The 2012 American Presidential campaign represents the first time that gamification was used extensively in the political process.” Could you tell us more about that?

The campaigns on both sides, dating back to the primaries, have used mechanisms like badges and leaderboards to motivate volunteers and get out the vote. At one level, encouraging someone to “like” a candidate on Facebook or make a phone call isn’t all that different from encouraging them to endorse or buy a product. The widespread behavioral micro-targeting of potential voters also draws upon the concepts we describe in the book, such as player modeling and engagement loops. That being said, we won’t know all the details until after the election. Doing gamification well isn’t easy, and there many ways that selling a candidate is different than selling a soft drink. I expect we’ll see even greater and more sophisticated use of gamification in 2016.

7 Responses to “The Hows and Whys of Gamification: 4 Questions for Kevin Werbach”

Leave a Reply to Kay Allison