Why it pays to be an ambivert. (And why you probably are one.)

This is my favorite chart from To Sell is Human, one that I explain in greater detail in a new Washington Post column. 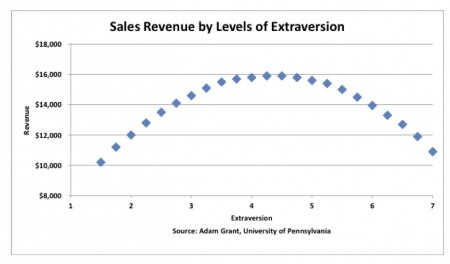 Here’s what it means and why it matters.

This summer Adam Grant, the youngest tenured professor at the Wharton School of the University of Pennsylvania, conducted a study that explodes the myth of the extraverted sales star. He examined a software company with a large sales staff, assessed where each salesperson stood on a 1 to 7 introversion/extraversion scale, and then charted how much they sold over the next three months.

His findings: The strong introverts (the people represented on the left of the chart’s horizontal axis, around 1 and 2) weren’t very effective salespeople. No surprise there. But the strong extraverts (those over to the right, around 6 and 7) weren’t much better. As you can see from the chart, the folks who fared the best — by a wide margin — were the in the modulated middle. They’re called “ambiverts,” a term that has been in the literature since the 1920s. They’re not overly extraverted. They’re not overly introverted. They’re a little of both.

In sales, leadership, and perhaps other endeavors, ambiverts have an advantage. And as I spell out in the Post, the odds are pretty good that you’re an ambivert yourself. Intrigued? Test your own ambiversion here and read more about how to develop this quality in Chapter 4 of the book.

20 Responses to “Why it pays to be an ambivert. (And why you probably are one.)”