Are meetings a force for good?: Some questions for the authors of The Org 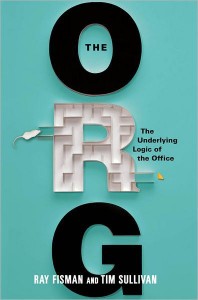 There’s lots to dislike about the modern workplace. Dunderheaded managers. Snarls of bureaucracy. And all those endless meetings. But Ray Fisman and Tim Sullivan say all those threats to our sanity might actually be helpful — the equivalent of sheep in wolves’ clothing.

In their provocative and endlessly interesting new book, The Org: The Underlying Logic of the Office (Buy it at Amazon, BN, or IndieBound) make a spirited case for the centrality of organizations in spite of (sometimes because of) their irritations. These annoyances, they explain, are tradeoffs necessary to get work done. Without them, even greater chaos and dysfunctions would ensue. And so rather than complain, we’d be better off simply understanding the trade-offs and seeing the organizational glass as half-full

Because I thought Pink Blog readers would find the book intriguing, I asked Fisman (he teaches at Columbia) and Sullivan (he’s editorial director of Harvard Business Review Press) to answer some questions.

In the book, you make a startling claim: That the dysfunctions of the modern workplace – the daily irritations aired at the water cooler and spoofed in Dilbert or Office Space – are actually an inherent part of the modern business organization’s success. Could you say something to make me feel better about this?

It can certainly feel demoralizing to have the tradeoffs that come with organizing laid out quite so starkly. But really, we’ve all experienced these firsthand, so in some sense we’re not telling you anything you didn’t already know. To the extent that making people aware of these tradeoffs has the effect of crushing their hopes of finding “5 Simple Steps to Ending Bureaucracy” or “Innovation, the Easy Way,” it should make you feel better, at least in the long run. Instead of chasing the latest fad, you can hunker down and actually get to thinking through when the benefits of organizational change outweigh their costs.

Organizational diagnosis can also help to make you feel better about the way things are right now: it’s made both of us feel a lot more Zen about the rules, constraints, and irritants now that we better appreciate why they’re there (part of what makes them irritating, after all, is their seeming pointlessness). As an exercise, take a minute and imagine how much worse things could be if they disappeared.

Here’s another counter-intuitive idea I encountered in your book: Jobs should be designed so as to minimize misaligned incentives. That seems to me to be the opposite of how we conventionally approach the issue of motivation, which is to find the right incentives to get a particular job done. What’s going on here?

The view that you just need to get incentives right starts from the faulty premise that all jobs – and the tasks they involve – are created equal in their potential for incentive-based motivation. Most jobs involve multiple components, forcing employees to multitask. Deciding how to bundle the responsibilities under any given job description should come before thinking about how to provide incentives to ensure those jobs get done.

It’s easy to see this if you consider really bad examples of task combinations, like assigning bank loan officers both the tasks of selling loans and approving them. A mortgage salesman can and should be paid on commission to ensure he works hard to generate business. But per-loan compensation for someone who is meant to ensure that mortgages don’t turn sour years down the road is a bad idea (although one that was widely practiced during the subprime boom that preceded the subprime crisis). So a well-designed organization will split up these two tasks, allowing incentives work their magic, where appropriate.

Making sure work gets done relies on an effective combination of picking workers who fit with the job, putting them in the right workplace environment (hello, Google massage parlor), designing the job well, and finally providing appropriate incentives. The last of these is but one part of a much larger puzzle.

In the chapter called “A Theory of Necessary Employee Disillusionment,” you write that in a functioning organization, the best employees will also be the most frustrated and disgruntled employees. How does that make sense for the health of an organization?

Organizations strive to hire the best people they can, the ones who are most eager to do their jobs. But not every employee will be self-motivated, and even those who are will have aspects of their job they’d prefer to avoid now and then. So organizations set up incentives and rewards, they monitor, and they measure what gets done. Ironically, those same incentives and measurement systems run the risk of driving your best workers—the ones who see their jobs as avocations and not just a way to mark time and get a paycheck—to become the most frustrated by the lack of clear connection between management measures and job performance.

This logic, taken to an extreme, could suggest that you know the org is working when your best employees are disgruntled and disillusioned. This is most emphatically not what we’re suggesting.

Instead, we see this as a warning to those captivated by the idea of an organization based on high-powered incentives and other rational economic principles. You need to balance incentives with an acknowledgment of the power of intrinsic motivation – and the costs of alienating your brightest and best-motivated employees. But it’s also a warning to employees that balancing incentives with freedom to take initiative is extraordinarily hard—and yet is a necessary cost of organizing.

Smart leaders realize they need to balance performance measures of performance and systems to motivate employees with some human kindness. And the smart employee is the one who recognizes that the checks and balances placed on their well-meaning initiative are a necessary cost of organizing.

What is one idea you’ve learned in your research that Pink Blog readers could put to work today in their careers?

This really builds on our answer to the third question. When you’re frustrated with your org, it’s awfully tempting to buy a sledge hammer and just knocking stuff down. And it would be fun too! But pretty soon, you’d take out some plumbing or a load-bearing wall and the whole enterprise would come crashing down. If you can remember that, as you sit in your cubicle or office or in your next meeting, the dysfunction starts to make sense. That’s a pretty good rule for employees and managers alike.

9 Responses to “Are meetings a force for good?: Some questions for the authors of The Org”