How to get ahead: 5 questions for Joel Garfinkle 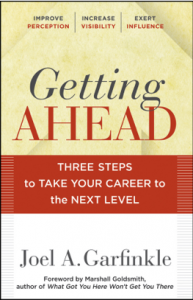 Not everyone craves the proverbial key to the executive washroom, but nearly everyone wants to have influence in their workplace, have others think well of them, and attain success in a way that’s meaningful to their lives. Joel Garfinkle has coached countless executives in how to reach their goals, and now he’s written a book called Getting Ahead (which you can buy at Amazon, Barnes & Noble, Indiebound, or 800CEORead) so that anyone can take his proven methods and use them to boost their own career.

Because his book addresses such core desires, I’ve asked Joel to answer a few questions about the book and his work as an executive coach. Here are his answers:

1.  In Getting Ahead you coach readers through three steps that are necessary to career advancement: improving other peoples’ perceptions of us, increasing our visibility, and exerting influence. In your experience, what holds otherwise high-achieving people back from taking these steps?

Many of my clients protest that they’re ‘‘too busy’’ to make the effort to bring perception, visibility, and inﬂuence into their work lives. They are consumed by and can barely keep up with their daily responsibilities. They oversee too many projects and have extensive to-do lists. They have seemingly endless meetings and are overwhelmed by e-mails. Well, let me ask: Do you think that leaders of large organizations receive fewer e-mails than you? Do they have fewer projects to work on, or shorter to-do lists? No. The difference is that they take time to prioritize perception, visibility, and inﬂuence. Despite the sense of urgency and importance that these demands provoke, these leaders still are able to make perception, visibility, and inﬂuence a vital part of their professional lives.

2.  In the chapter on improving one’s image, I like your emphasis on getting constructive feedback from others. What do you think is the most painless (or least painful) way to go about doing this?

Some possible ways to introduce the discussion are:

3.  If I had to guess, I’d say the chapter on increasing visibility is the one that creates the most anxiety in readers. Nobody wants to be seen as pushy, aggressive, or a credit-hog. What are some ways to cultivate visibility without being obnoxious about it?

4.  Clearly Getting Ahead is relevant to people at the beginning of their working life – but what about people who are nearing the end of their careers? Where could improving perception, visibility, and influence take them?

The book’s third section, on inﬂuence, is most relevant to people nearing the end of their careers. As upper executives, you spend most of your time inﬂuencing signiﬁcant results and people’s behavior.  By inﬂuencing others, you increase your value to the overall organization.

While visibility isn’t as important as it used to be, as a person in upper management, you still need to make sure you have visibility to other executives who identify you as someone who drives the company’s success forward.

5.  Your book is packed with tools and tips. What’s one tip Pink Blog readers could use – today – to take themselves to the next level?

Two studies conducted by Cameron Anderson and Gavin J. Kilduff in 2009 found that people who speak up and act dominant will be perceived as competent even if they aren’t. They merely appear so because they believe so completely in their own competence. So what does this teach us? Speak up. Speak ﬁrst. Speak often. Stop overthinking and delaying what you want to say. Stop being fearful; instead, trust in yourself. Have conﬁdence in your knowledge. Focus more on what you know and less on what others think. Identify two different situations in which you decide to speak up and speak often. You might have to leave your comfort zone, but do it. You’ll be heard and seen as competent, and you’ll notice others’ perceptions of you starting to shift favorably as you contribute more often.

One Response to “How to get ahead: 5 questions for Joel Garfinkle”